H   istory is marked by catastrophic events that defy meaning and understanding. The 20th century was a century of prosperity and progress; it was also history’s bloodiest. The death toll from war and genocide reached 140 million people. Trauma of this magnitude poses grave challenges to memory and thought. This work explores failures of memory and cognition—The Blackout—as a condition that plagues history, and is particularly problematic in an era of mass media, in which memory is increasingly disembodied and virtualized, undermined by [what might be called] a ‘Generalized Media Disorder’. Technologies of media and war are creating a condition in which the virtual world is displacing the ethical world. The Blackout is a space of memory and thinking that collapses with Catastrophe and falls into a stupor. Humanity has been nearly extinguished by the tremendous violence it has enacted, pushing philosophy, language and ethics to their limits.”
— BLACKOUT, jacket blurb.

A nd music can be both a political act and powerful antidote to the collapse of social memory and the erosion of community... the withdrawal into passive, vegetative isolation, each at home, continually surfing Netflix, surfing the web.
T he combination of the video imagery and the live and the electroacoustic music was imaginative and highly listenable and watchable. Joan Grossman’s video was elegant... with a simple beauty that leveraged symmetries across the vertical and/or horizontal axes in the center of the 8 x 6-meter projection screen in Epperson Auditorium. The video involved replication and reflection of imagery in kaleidoscope fashion, at times with superimposed additional imagery blended into the central part of the visual field. 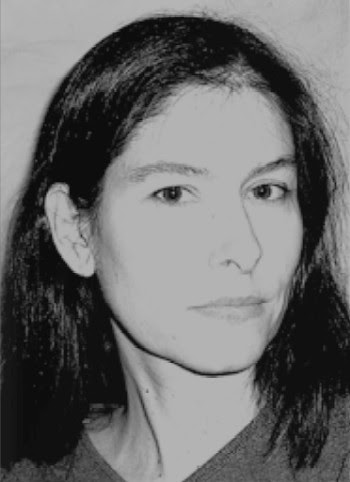 U nlike certain computer music / media compositions where the composer-artists ‘try too hard’ or succumb to temptation and use too many of the diverse array of techniques and patches available to them (resulting in sensory overload for the audience, hindering our grasping a memorable meaning or narrative arc), McIntire and Grossman achieved a satisfying, deliciously cohesive, coherent effect. 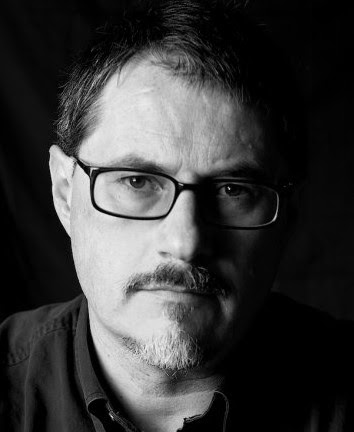 P ercussionists Jennifer Wagner and Christopher Howard performed at percussion tables on the right- and left-hand sides of the auditorium, while the recorded electroacoustic tracks were played through Mackie SRS 450® powered monitors and SRS 1500® subwoofer at the front of house. Seated as I was front-and-center, the antiphonal bells and gongs and cymbals, and glass wine goblets bowed across their rims with violin bows, and hammered and brushed brass bowls, and Equilibrium® tuned-box slit-drums, and Daisy® BBs rolling on the underside of a tom-tom drum head—all of this was wonderfully ‘immersive’ with the house lights dimmed. Great sibilance of the live percussion sounds, creating a rich contrast to the electronically-filtered and distorted sampled-voice and other sound content in the digital-recording tracks. [The ‘live’ elements might be better still if yet another pair of percussionists were added, positioning them toward the rear of the auditorium/performancespace so that the entire audience could experience the intense immersive effects that we did at the front.] 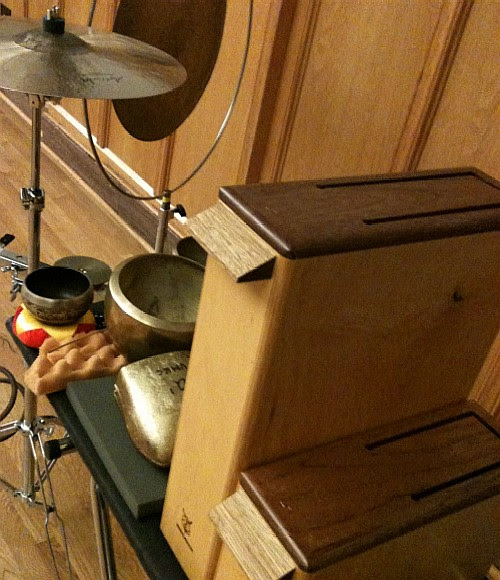 T he electroacoustic recording and reproduction/sound-reinforcement EQ was expertly done by McIntire. Both of the pieces have a low-pitch ‘red-spectrum’ rumble—almost boilerroom-like, or intrauterine—that imparts a subtle but pervasive ‘interiority’ to the music, very chesty, very warm.

G etting the pre-recorded digital tracks to ‘sit’ well amongst live performers relies on the tracks having an even level, a congenial tonal and level balance, and the right reverberant ambience. McIntire does this superbly, gracefully executing minor adjustments at the workstation control-surface in response to moment-to-moment performance decisions made by Wagner and Howard. Compressor and gain automation settings were spot-on, so that the percussion sounds sat happily in-track, with none of the live percussion effects sounding too loud or too quiet or clashing with the pre-recorded sonic material and synthesizer tracks.

F or some of the voice content (e.g., DECtalk Hawking-esque recitations of NOAA National Weather Service Marine Forecasts; alpha-bravo-charlie...romeo-sierra-tango...zulu), McIntire adds density to the voice sample by upping the compression ratio to maybe around 6:1 or 8:1 and then adjusts the threshold to a couple of dB on average-level parts. This means quieter sections are left alone and anything louder is jumped-on hard, bringing it closer to the average level. The coherence or cohesiveness of these two compositions, each with its volume level and acoustic complexity ascending to a climax about two-thirds of the way through and then tapering to a quiet conclusion, is nicely enhanced by this approach.

M cIntire’s EQ and engineering are commendable as noted above, and he does not go overboard on special effects. His EQ cuts are made over quite narrow bands, and his boosting is gentle and wide. McIntire gently applies boosts in the 50-300Hz band to add warmth. He applies cuts in the 1 KHz band, to deemphasize nasal vocal sounds, and adds generous ‘presence’ with boosts between 4 KHz and 8 KHz. The magical sense of Nature and air and space involves a wide boost applied between 12 KHz and 20 KHz, and that was really beautiful up-front, seated in Row #1. With these two compositions that explore the interplay between Nature and Technology, between humankind and other species—between inanimate noisy things like water (sometimes seemingly talking to us, almost alive, almost human), and supposedly-sentient creatures (humans) who often act in hostile, destructive and uncaring ways as though they were inanimate—the musical and artistic success absolutely depends upon making these EQ choices right.

T he ArtSounds series, of which the McIntire-Grossman ‘Memory of the Future’ program was a part, is co-sponsored by UMKC Conservatory and Kansas City Art Institute.

J oan Grossman is a Brooklyn, New York-based independent media artist and producer. Her work has been screened in more than 20 countries and won numerous awards. She is currently Visiting Professor in Film & Media Arts at UMKC. Grossman was formerly a producer for NPR and Voice of America on a variety of programs, including All Things Considered, Afropop Worldwide, Kids America, and The Territory of Art. She has worked in Africa, China, Russia, and throughout Europe, has produced media for public interest organizations and NGOs, and has also worked as producer on European documentaries and feature films. Joan has a Ph.D. in Media and Philosophy from the European Graduate School and has taught film production and theory. She has worked with leading theorists and filmmakers such as Agnes Varda, Claude Lanzmann, Chantal Akerman, Jean Baudrillard, and Jacques Derrida. Her book, ‘Blackout: On Memory & Catastrophe’, was published in 2009 (link below).

D avid McIntire is a Kansas City, Missouri-based composer who, with composer-musicologist Kyle Gann, co-directed the 2009 Second International Conference on Minimalist Music at UMKC Conservatory. In 2010, he launched Irritable Hedgehog Music, a record label focusing on minimalist and soundscape compositions. McIntire has performed with Colorblind James Experience. With pianist R. Andrew Lee he has produced a recording of Tom Johnson’s ‘Hour for Piano’ (link below). 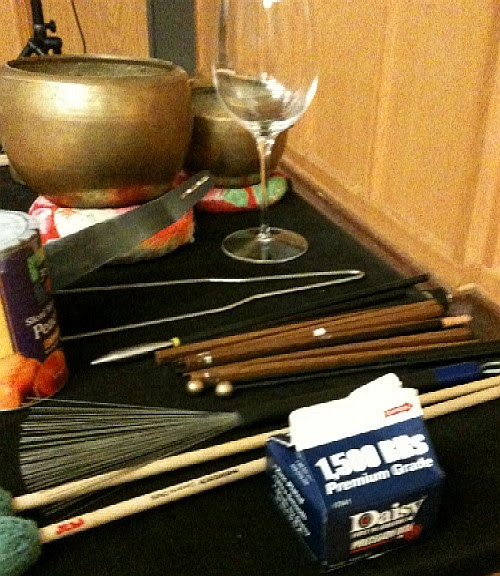 Posted by Laurie Compton at 5:31 AM